Time is money, and time as a currency has never been more valuable. Today, organizations rise or fall based largely on their speed and agility. Companies that succeed do so by generating insights faster in order to react to opportunities and obstacles sooner. Companies that struggle often do so because they invest too much time and resources into finding insights that are unclear or untrustworthy.

Moving faster depends on having the best information in the shortest amount of time, which can be a struggle for Microsoft Dynamics 365 for Finance and Operations users. Performance reporting (the most important asset for enterprise decision-making) is notably lacking, mostly because it’s often a highly technical process that involves the finance department, the IT team, and days or weeks of work from both. Reporting can be a slow process, and it can hold back the entire organization as a result.

Atlas for Microsoft Dynamics is designed to be an across the board reporting upgrade. From a functional perspective, that means it accelerates the most time- and labor-intensive aspects of reporting using advanced forms of automation. Since so much of the work is handled automatically, reports deliver better insights in less time to everyone from executives downward. With Atlas, it’s possible to accelerate these three key tasks:

Manually uploading data is often an hours-long process that creates the risk of data being overlooked or mishandled. Atlas automates this entire process, uploading whatever data the user has asked for. Users have a library of more than 150 upload templates to choose from. They can also work with intuitive, in-depth tools that make it simple to create customized templates without any involvement from IT. Atlas doesn’t just make uploads easier, it automates them entirely. 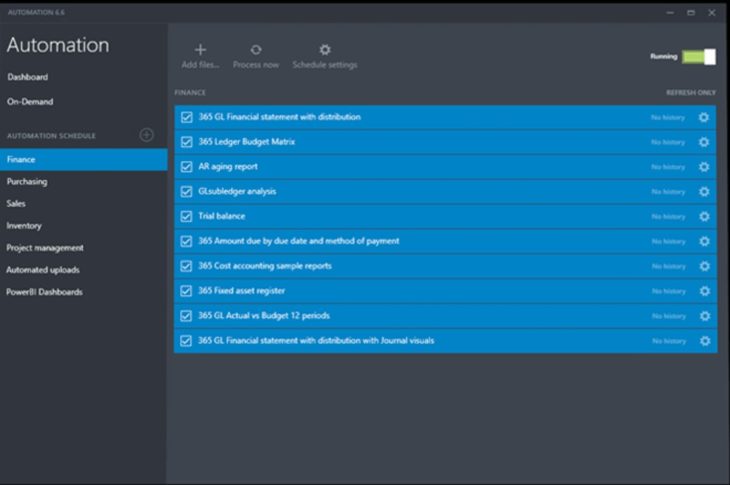 When reports are slow or shallow, decision-making suffers. Atlas turns reports into an on-demand resource by automating the process from beginning to end. Creating reports takes minimal time thanks to time-saving measures like having the accruals journal automatically uploaded. Once the reports are ready, automation can also distribute them to anyone in the organization. A process that used to take long hours of careful work runs almost on autopilot with Atlas.

3. Population of Dashboards and Visualizations

Getting data out of Microsoft Dynamics and into Power BI is another time-consuming process that slows down access to insights. Atlas creates a direct link between these products, allowing data from Microsoft Dynamics to directly populate the dashboards and visualizations that users create in Power BI. The finance and IT teams both save time instead of managing data, while various stakeholders have access to complete and accurate information when considering what to do next.

Of all the ways that Atlas accelerates tasks and saves time, the most significant might be that it works within Excel. Instead of learning a new system with an unfamiliar interface, users take advantage of the tools they’ve been using for years or decades. It’s the easiest way to embrace financial automation and the best way to supplement the capabilities of Microsoft Dynamics 365 F&O and AX. When you’re ready to experience the speed of Atlas in action, please request a demo.