When Wayne Nguyen, Director of Financial Planning and Analysis, started at Healix, he was confronted with an outdated reporting process that involved using Microsoft FRx, a financial reporting and analysis program licensed as part of the Microsoft Dynamics ERP system, to pull data from Microsoft Dynamics SL before spending considerable time manipulating the data further in Microsoft Excel. “The problem with FRx was that it didn’t allow you to be flexible in report design, and it wasn’t tied directly to Excel,” Nguyen said.

Because of the complexity associated with Microsoft FRx, Nguyen wouldn’t even attempt to create a new report from scratch. “We really wanted to move away from Microsoft FRx,” he said. “We were also looking for a solution that could be a data warehouse, a central repository for data. Not just financial, but operational too.”

Healix considered a host of solution options and had nearly settled on Adaptive Insight when they saw insightsoftware’s Spreadsheet Server solution for the first time.

The first thing Nguyen and his team loved about Spreadsheet Server was that it lived in Excel. “It allowed me to be completely flexible with my report,” he said.

The best indicator of success, however, was their KPI report. The original report was comprised of just five pages, but with Spreadsheet Server at their fingertips, the Healix team quickly and easily expanded it to a full package of 20 pages. “It used to take a long time for anyone to produce the report,” Nguyen explained. “Now, I can do it with just two days of work.”

The Healix finance team loves the flexibility and accessibility they now have with Spreadsheet Server. In fact, Spreadsheet Server has allowed them to be less dependent on the business analyst team to help them with reports, freeing them to focus more on analyzing their own numbers.

With everything from ad hoc reports to a Management Discussion and Analysis report package for executives and board members, Nguyen and his team can build and refresh reports in a fraction of the time.

"This is the first time in company history that someone has put together a complete package of all the operating and volume metrics into one consolidated report."

Because of its home in Excel, Spreadsheet Server allows completely flexible reporting

Enhanced accessibility and flexibility enable end-users to easily complete reporting themselves, freeing up business analysts for other tasks 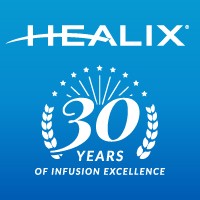