Government entities have a fundamental responsibility to manage money carefully. When every dollar comes from taxpayers, there’s a strong expectation that money will be spent wisely. In many ways, the public sector faces stronger calls for accountability, visibility, and effectiveness than does the private sector.

How does a government agency meet those calls? First and foremost, it is by understanding the reality of its own financial situation. Government entities can be neither responsible nor accountable if they don’t understand the strengths and weaknesses of their own balance sheet. Furthermore, no entity can lead effectively if it has misconceptions (or wild misunderstandings) about its own financial performance. For these reasons and more, government entities must track their financial performance on a constant basis.

The question is what key performance indicators say the most about an entity’s strengths and weaknesses? If entities are going to invest the resources (time, staff, etc.) to track metrics closely, they need to focus on the numbers that indicate the most and ignore those that obscure the financial reality. With that as the goal, consider the following five metrics to be essential.

The Ratio of Operating Costs to Budget

Like all organizations, government entities need to know how their operating costs compare to their total budget and whether that ratio is rising or falling. If rising, it suggests that the entity is failing to control spending relative to the amount of money coming in. Alternatively, when this ratio falls, it suggests better cost controls but could also indicate a need to rethink spending priorities and budgeting targets.

The Ratio of Personnel Costs to Operating Costs

Labor costs make up a large percentage of the overall operating budget at private and public sector entities alike. In both, there’s a fine line between having too much and too little staff. That’s why government entities must track the ratio of personnel costs to operating costs closely. The ratio won’t change if staff numbers and operating costs go up proportionally. Therefore, when it does change, it requires a deeper look into why.

For the many government entities that collect taxes or have their revenue linked to the size of the population they serve, it’s important to observe how incoming revenue compares to changes in the population. If that number should fall, it could seriously jeopardize the ability to deliver services. If it starts to increase, however, it makes a case for increasing spending in other areas. In some form, all government entities need to know how the funds coming in compare with the scope of work going out.

Government entities should track all aspects of their debt closely, but particularly their ability to meet near-term obligations based on annual revenues. This metric reveals several things. Most urgently, it reveals whether debt problems are looming because revenues can’t cover liabilities. From a larger perspective, it brings into focus how the entity approaches debt and risk. Changes in either direction may mean an entity is headed on a different course than intended.

An entity with a big footprint stretched across multiple departments, locations, or obligations can’t become cavalier about spending. It should do just the opposite by monitoring its average daily spending costs and tracking historical changes.

The final metric highlights a challenge common to all of them, namely, investing the resources necessary to collect financial data from multiple sources, organize them into a usable form, and analyze them to get updated metrics. It’s unfeasible to do this work manually, which explains why many government entities don’t do it at all.

Cumbersome data shouldn’t keep any entity of government from having world-class financial visibility and flexibility. With reporting tools from insightsoftware, the hard work of tracking metrics largely runs on autopilot, updating the numbers without needing constant user input. Now that it’s easy to track anything and everything (financial and operational), that raises another question—what other KPIs can and should government entities be tracking? 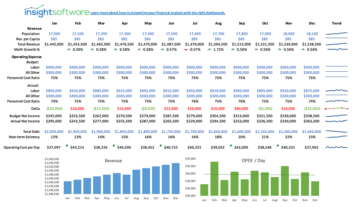