Home > Blog > The Growing Importance of Automation in Disclosure Management

The Growing Importance of Automation in Disclosure Management

Disclosure management is the act of managing the disclosure process internally within organizations, and then making accurate information available to regulatory bodies, as well as stakeholders such as investors.

For example, every public company in the US needs to periodically file to the SEC. The European Single Electronic Format (ESEF), mandated by the European Securities and Markets Authority (ESMA), on the other hand, stipulates that all companies listed on a regulated exchange in the European Economic Area (EEA) must produce their annual reports in a web-native XHTML format. 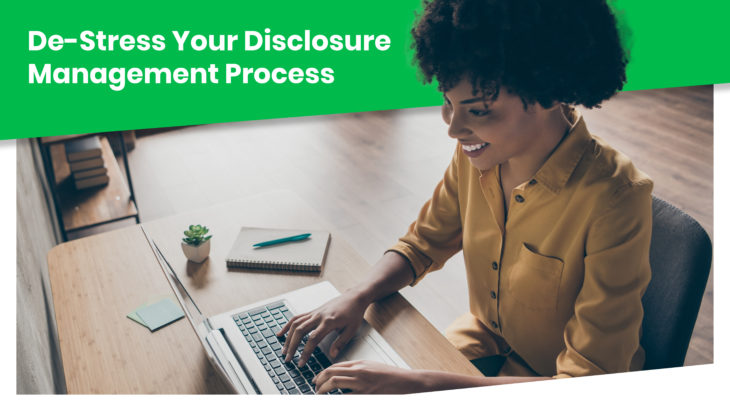 With this in mind, there is an important role for someone in an organization to consolidate the financial information (the numbers) and then tell the story behind it (the narrative).

Matching the Narrative with the Numbers

Most organizations of any decent size will have IT solutions to collect, aggregate, and crunch the numbers. For example, these can include general ledger, enterprise resource planning, and/or corporate performance management systems.

However, many organizations do not yet have a solution for bringing the numbers and narrative together in one place and in an automated way. Instead, they typically use desktop applications such as Word, Excel, and PowerPoint to perform this function.

Internal and external disclosures are important to communicate company stories to both the public forum and internal management teams. The narrative elements of those stories are complex, composite reports that combine numbers, words, and charts. While tools can produce the numbers needed, these data are then copied and pasted or rekeyed into Word or PowerPoint to create the footnotes for narrative reports.

The Last Mile of Reporting

Narrative reporting is the last mile of reporting, and it can be fraught with issues when multiple authors, multiple document versions, and a formal approval process are involved.

Internally, narrative reporting is particularly useful for board packs and board presentations in which there can be 100+ slides. Each slide may include a table or chart, but it also needs to be commented on. However, it can take a team of five people a total of five days to produce these reports.

Externally, when companies issue multiple reports, they all need to show the same numbers and a consistent narrative. They could include annual reports, investor press releases, as well as result decks. Any last-minute changes can cause confusion when numbers and narrative don’t match up.

For example, a late tax change could cause profits to decrease, so this also needs to be reflected in a change to the narrative. It’s a mistake that can often be overlooked.

In the best case, mistakes affect confidence in the company and its senior team because it demonstrates carelessness. In the worst case, errors can hit the stock price or lead to a fine being levied on a company for publishing misleading information, with the CFO being singled out for blame.

These issues reappear reporting period after reporting period, month after month, and year after year. And even though reports have a high degree of commonality from one period to the next, rolling them over is normally a huge task because it’s risky to simply copy and replace. For example: ”2021” may appear as a year but also as a number somewhere else in a document. Creating reports with manual processes means high-valued employees need to focus on low value work when diligently checking the accuracy of every piece of narrative. This, in turn, can involve long hours, because filing late is not an option. There’s a clear opportunity cost that can be avoided by replacing manual checks with an automated software solution, as well as the chance to improve employee turnover and job satisfaction.

It’s also difficult to produce consistent internal/external reports that effectively tell the right story behind the numbers. This is especially true when the numbers or facts within the final reports can be out of date before the report is even published.

And there is no compliance or control during “close to disclose” periods. Authors can spend hours manually copying and pasting data from source systems or disparate spreadsheets, passing files back and forth over poorly controlled channels, such as email, which puts the integrity of the whole process at risk.

The Role of Certent CDM

Companies that have invested in a solution such as Certent CDM from insightsoftware can significantly reduce disclosure risk. They can use it anywhere they want to combine words and numbers for publication, and exercise much greater control over high frequency, recurring, multi-author reports. This brings speed, accuracy, and consistency to a laborious, error-prone, uncontrolled process.

Learn how a mid-tier, high-tech company is using Certent CDM to improve efficiencies

Certent CDM aligns with XBRL (eXtensible Business Reporting Language) frameworks in most jurisdictions. XBRL is a freely available and global framework for exchanging business information. One use of XBRL is to define and exchange financial information, such as financial statements.

Certent CDM is integrated, which means that report production and tagging can happen at the same time, not at the end of the reporting cycle. It enables customers to have more control of the disclosure management process, including the ability to respond to late changes easily.

Disclosure management software brings order to company numbers and narratives by creating a single version of the truth that informs multiple documents, no matter who is working on them. In the current unpredictable and volatile economic times that we are living through, this can only be a welcome and increasingly vital addition to the information management framework.