We are fresh off our planes from Directions North America (NA) in San Diego, California – and are ready to share all the hot topics about NAV and Business Central, from the forefront of where announcements break ground – at the first event of the fall release season for Microsoft Dynamics Partner communities.

First and foremost, with over 850 registrants, this was the largest Directions NA in history. And this wasn’t just a year-over-year increase trend. This event has had its peaks and valley’s, and we suspect this high attendance directly relates to fast-evolving Microsoft Dynamics 365 Business Central – the new SMB ERP star for Microsoft. That means that for the first time, Directions isn’t just for NAV partners anymore – GP and SL are jumping on board too.

Which leads us to a summary of the most significant announcements at the show:

Business Central is coming to the SMB market at full speed, and industry tailored versions are on the way.

One of the most impressive, standing-ovation worthy announcements almost didn’t make it to the show; but thanks to some last minute testing by the Microsoft team, we were able to see the biggest reveal yet during the Keynote on Day 2. Microsoft revealed the ‘automated converter’ of C/SIDE or CAL IP to AL and Visual Studio code into the Business Central base app.

What does that mean in plain English? Partners who were scrambling to figure out how to fund, find time and provide resources for moving specialized IP to Business Central, now have a fast path to completion. So for existing NAV customers who rely on these business-specific functions, there will be a seamless, uninterrupted upgrade path to Business Central coming, likely, by spring. It also means, the move from separate SMB Microsoft ERP systems like GP, SL, and NAV, into one ‘Central’ solution, is officially here.

The Roadmap is clear on two things: Customers win and the Windows client loses:

Microsoft proudly flaunted their roadmap in conjunction with an instruction manual for how everyone wins with the new Business Central model – by putting cutting-edge technology, adaptability, and customer success first. 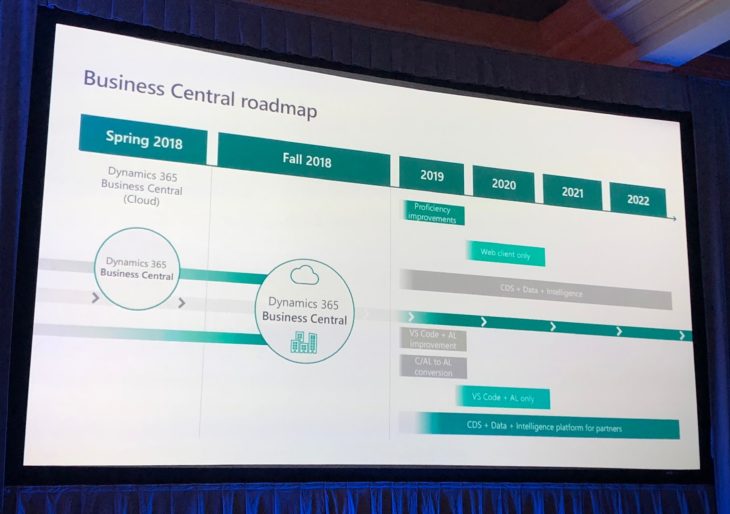 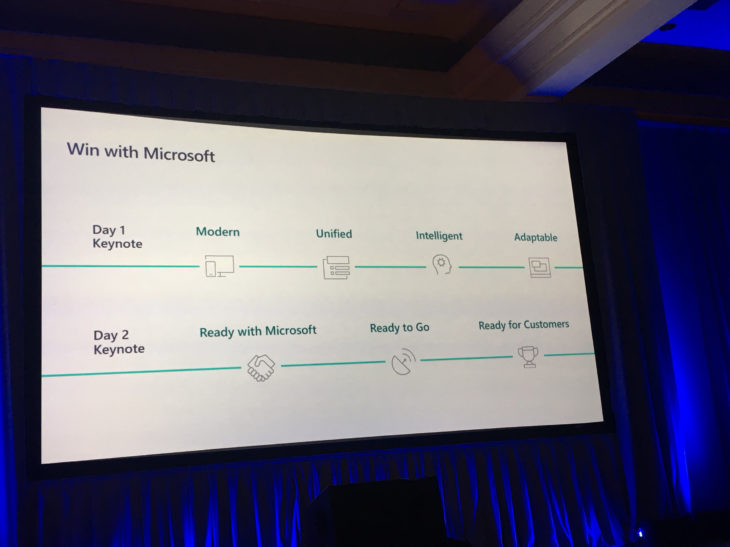 In a nut shell this means Microsoft is pushing their Dynamics Partner Network (now aptly acronynmed to “MPN”) to prepare their resources and offerings for delivering modern solutions on the Business Central platform. Those offerings will emphasize useful function out-of-the-box, in an environment that is accessible anywhere.

This announcement is excellent news for small-to-midsized businesses everywhere, and it’s bad news for the aged Window clients, whom Microsoft said must be abandoned, quite literally, before everyone went home. In addition, it put a considerable reliance and focus on the ISV channel products for Business Central – which essentially become ready-to-use applications for various needs like tax processing, industry compliance, and custom reporting, available in AppSource and ready to go immediately on Business Central.

Many ISV solutions aren’t built and available in AppSource yet. However, the solutions from Jet Global are ahead of this curve. On the second day of the show, we announced that our flagship Jet Reports and Jet Analytics solutions are Business Central ready with the October 1st release.

Check out everything new in the 2019 Jet releases now.

A budgeting solution built for SMBs was long overdue

The big ISV announcement at the show was the launch and release of Jet Budgets, a fiscal-planning solution that focuses on controlling the chaotic spreadsheet mania, which is a shared pain among SMB’s and NAV, GP, and Business Central customers. Most solutions available to automate workflows, track visibility on progress, and control the input and approval on budgets are bloated corporate performance management (CPM) systems that are extremely expensive and include unnecessary and complex functionality that takes months to implement, and even longer to train users to use productively.

The first showing of Jet Budgets on Day 2 during the morning keynote, which explicitly addressed the answer to these traditional obstacles in the budgeting process through a web-based, Excel integrated solution, was met with loud applause, followed by days of re-Tweets and pre-orders.

In true Directions style, this event didn’t come without contention between Microsoft and its rapidly adapting partner network. Within the breakout sessions on Business Central Licensing and Pricing, Microsoft revealed that NAV 2018 licenses would no longer be issued after December 31st, 2018, and everything moving forward from there must be on a Business Central license (of which both a cloud and an on-prem .flf license can be issued for hybrid and transitioning environments).

The goodbye NAV parade may sound sad or dismal, but it’s actually refreshingly progressive. The Business Central application and platform is built from all the best parts of NAV and tailored made for the small-to-mid-market needs and accessibility – eliminating the pricey and complex configuration, user access, or required maintenance of infrastructure which can all be taken care of by Azure now.

The Future is bright

Businesses have spoken – you don’t want or need a list of overly-complex solutions to try to discern from in order organize and run your operations, that come with disruptive implementations, a long list of hardware requirements, inflated price tags, and functionality made for a technical wiz. Microsoft hears you, partners hear you, and Business Central with Azure is the answer.

At Jet, we have long agreed with this movement, and we also live by the ‘simple and adaptable’ concept. That’s why we released Jet Budgets, and it’s why our flagship Jet Reports solution, and widely used Jet Analytics data warehouse automation platform, have succeeded with over 219,150 users.

We are available on AppSource now, and we are ready for Business Central. Are you?